We will not post any response That contains Loshon Hora, Nivul Peh, Bizoyen Talmedei Chachamim or any other Diburim asurim.

As Pesach is approaching and we're all preparing for this special night, I want to remind you what is written in Beis Ahron in the name of his father, Reb Osher of Stolin. The reason why the Pesach night meal is called Seder, which means order (arranged), because in this evening we set the tone for the entire year. We are organizing the rest of our future year on this night, and the way we conduct ourselves on this night will have an influence on the entire year. Further the Beis Ahron explains that many mitzvohs are performed throughout the year to commemorate the exodus of Egypt, therefore specifically on this night one should be more tuned in to the way one conducts himself.

In a letter to his followers, the Beis Ahron writes that the tremendous enlightenment that came down to the world during our exodus from Egypt returns every year during this special night and one can draw tremendous spirit from this holiday.


May we all merit to set a Seder for the entire year in the best possible way and prepare ourselves properly for the ultimate redemption - Lishono Habo b'Yerusholayim habinuyo.

Wishing you all a Happy and Kosher Pesach,

Rabbi Yitzchok Wolpin
Posted by Site Editor at 10:49 AM 0 comments

A new sefer called 'Ish H'eshkolos' was recently published. This Sefer is the life story on one of our previous illustrious Gedolim Maran Harav Yisroel Zev Gustman,zt'l-Rosh Yeshivas Netzach
Yisroel in Rechavia.

It is in Grodna that he became friends with Maran Harav Chaim Shmulevitz,zt'l‎ and Maran Harav Shmuel Rozovsky‎,zt'l plus many others.

At the young age of twenty (after he got married) he earned a position on the Beis Din of Vilna headed by Maran Rav Chaim Ozer,zy'a

He often gave shiurim to his talmidim for 2 1/2 hours.

This week we are privileged to begin the third book of Torah, Vayikra (Leviticus). The portion discusses the various different offerings and sacrifices which one can bring either as atonement or as a gesture of good will. There’s are offerings that are obligatory and those which are relevant only due to an occurrence. The most important element is the intention and the thought during the process.
The portion begins with Hashem calling Moshe and telling him the process of contributing an offering and the laws and details. The word vayikro - and He called is written with a small letter Alef at the end of the word. This can be read as vayikor to mean ant it occurred. Our sages teach us that this was due to Moshe’s humility, he didn’t want to write that Hashem called him but rather that it was an occurrence that it so happened that Hashem spoke with him, and not like the was a steady occurrence.
The Beis Avrohom of Slonim adds another dimension to this phrase. Pious Jews would always draw a message from anything they saw or anything that they heard for serving Hashem. For example, Reb Moshe Leib of Sasov was once traveling and a peasant asked him to help lift a heavy item. Reb Moshe Leib apologized and said I’m sorry but I can’t. “You can, you just don’t want to” responded the peasant. Reb Moshe Leib said that his whole trip was worth it just for that one message he heard from the peasant - you can, you just don’t want. Many times we convince ourselves about different things we should do, that we simply can’t, in reality, we can we just don’t have a desire strong enough.
Says the Beis Avrohom, vayikor el Moshe- anything which occurs to a pious Jew, vayidaber Hashem eilov- Hashem is talking to him. Everything that occurs around us, everything we see and hear, is G-d speaking to us.
In addition to the portion of the week we will be reading excerpts from the portion of Bo which discusses the mitzvah of Rosh Chodesh and the laws of the Pesach offering. As we all know we are dependent on the lunar calendar. The moon is renewed every month, as do we. The Jewish nation has the ability to renew and start anew, even from the most difficult situations spiritually and physically. As our sages teach us Jews are compared to the moon, they may look like they are about disappear and they renew like a full moon. Our sages teach us that the month of Nisson has the juice to feed us all year. Let us utilize it and be blessed with the power of renewal for the better in all areas of life.
Gut Shabbos
Gut Chodesh,
Rabbi Yitzchok Wolpin
Posted by Site Editor at 5:42 PM 0 comments

The Cleveland Kolel - Yad Chaim Mordechai under the leadership of Hagaon Rav Yaakov V. Katz, shlit"a, son of the founder of Telz in Cleveland, Maran Harav Chaim Mordechai Katz, zt"l, is a tremendous success, attracting yungeleit from all over.

The new beautiful building serving as the Beis Medrash is truly magnificent and a display of
Kovod Hatorah!
Posted by Site Editor at 5:13 PM 0 comments 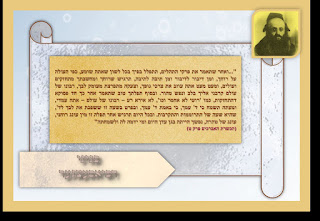